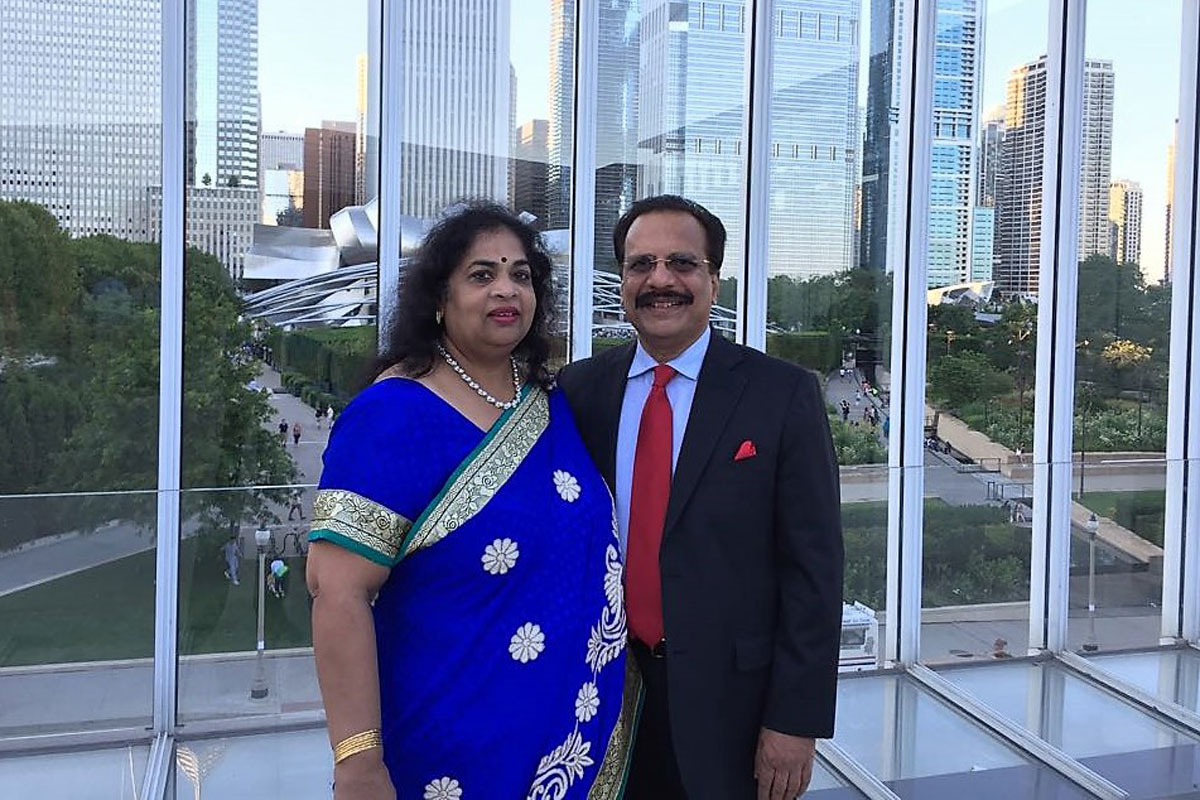 If you’ve visited the Franklin Medical Clinic in Michigan City, you might have gotten a flu shot or perhaps some antibiotics, but you might not have known that your physician – Dr. Vidya S. Kora – is a very active member in the fight against the ongoing opioid crisis here in Northwest Indiana.

Specializing in internal medicine at Franklin Clinic in Michigan City, Indiana, Dr. Kora has been practicing medicine in Michigan City for the past 30 years. A former president of the Indiana State Medical Association, Dr. Kora currently serves as an Indiana delegate to the American Medical Association, and chairs the AMA’s political action committee, or AMPAC. He also served on the board of St. Anthony Hospital for close to 20 years and chairs on the northern Indiana regional board for Franciscan Alliance. He currently serves on the board of the Unity Foundation of La Porte County, a position he has held for roughly 15 years.

Dr. Kora is currently in his second term as La Porte County Commissioner, has served two terms as La Porte county coroner, and one term on the Michigan City Area School Board.

To say that he is active is, perhaps, an understatement, and one of the areas Dr. Kora is most passionate about it in addressing the area’s current opioid crisis, and works diligently toward finding ways to prevent the spread of drug addiction in the region.

“As county coroner, I had seen many deaths related to opioids,” said Kora. “As a member of the state medical association, we have been trying to find ways to address this crisis through that organization. Roughly a year ago, I was asked to serve on NACO, the National Association of Counties, on their opioid task force. We developed a list of recommendations which have been published in a report which was then disseminated to all NACO members nationwide.”

According to Dr. Kora, that document has been used to approach legislators – congressmen and senators – in an effort to convince them to increase funding to fight the ongoing opioid epidemic.

“There are several different ways to approach this epidemic. Not just through direct medical treatment, but we also need to avoid future addiction by changing how doctors write prescriptions.”

Dr. Kora explains that roughly 10 years ago, patients suffering from chronic pain were given satisfaction surveys which asked them to rate their satisfaction at the level of treatment they received. This in turn often caused physicians to be more aggressive in treating patient pain and discomfort. Doctors were pushed to prescribe pain medication, and this sometimes led to the over-prescription of pain medications to avoid poor scores.

“We lobbied through the state AMA to have questions related to pain management removed from questionnaires in the future. We have highlighted the problem of opioids, and currently recommend that physicians only prescribe a one or two-week supply of opioids, rather than ordering a larger supply, as before,” said Kora.

The doctor says that the overall goal is to ensure that patients who suffer from chronic pain should have that pain managed effectively, without over-prescribing.

“We are taking measures in the medical community to see what can be done to cut down on patient access to opioids, while at the same time ensuring that patients who are in pain are being taken care of,” said Kora.

Born and raised in India, Dr. Kora came to the United States in 1982. He originally lived in Chicago, and completed his residency at Cook County Hospital. After completing his residency, Dr. Kora said that he decided to practice here in Northwest Indiana.

“I really feel that this area is a gem. We have enjoyed our life here,” said Kora. “We moved here, raised our family here. People here are very friendly. We wanted to be close to Chicago, but didn’t want to have to deal with the traffic of the city. Northwest Indiana gives us the perfect balance. Everything here is just a few minutes away, and if I want to go to Chicago, it’s just an hour away, so this is just perfect.”

Dr. Kora is a firm supporter of plans to double-track the South Shore Line, “I really feel that it will lead to growth for the area.”

Dr. Kora says that his journey to become a doctor originated when he was a young boy in India.

“When I was 12 years old, my father suffered a stroke and was paralyzed. He was bedridden and could not speak, only living for 10 years after that. That time was transformative for me, and that was what led me to a career in medicine.”

Dr. Kora says that a typical day consists of an early workout, followed by doing his rounds in the hospital, answering emails and visiting with patients in his office. In his free time, he enjoys reading.

“I like to read non-fiction and personal development,” says Dr. Kora. “I also enjoy golf and spending time with my family. My wife, Sudha is an office manager at the clinic where I work, and we have two children a daughter and a son. Both are also physicians and both live in Columbus, Ohio.”

“For many years, we used to go to Rudini’s, but that’s closed, so now we go to the Hacienda Mexican Restaurant here in Michigan City, and also enjoy the Potawatomi Country Club, where we are members.”

Dr. Kora encourages everyone to become more familiar with the opioid problem in our area.

“It is a huge problem. I think everybody should work to become more familiar with the scope of this problem, and work towards prevention by talking with their children, families and friends about the risk involved. Also, I encourage people to lobby their elected officials to approve adequate funding to combat this crisis.”

To book an appointment, visit the Franklin Clinic at http://www.franklin-clinic.com/